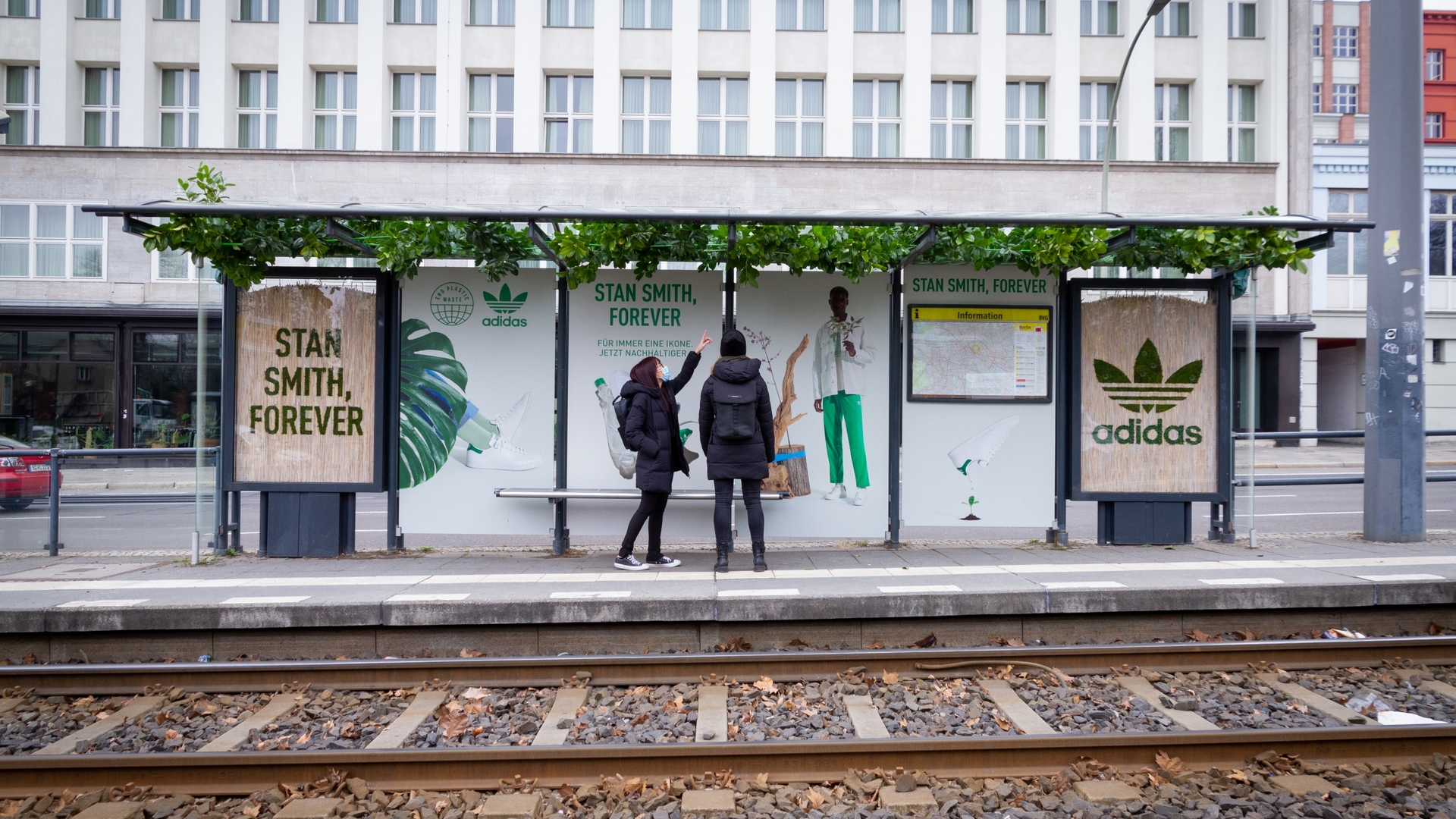 Home  ›  Stories  ›
Graffiti with moss: the sustainable way to advertise

Graffiti with moss: the sustainable way to advertise

The word moss feels like a synonym for damp and moist. You expect to see it in a shaded forest growing on the bark of trees and fallen logs, certainly not on the side of a prominent building in the middle of the city. But graffiti with moss is very much a thing and very much alive. It’s a form of street art that uses living moss to write on walls and decorate buildings. Graffiti with moss is a spin off from guerrilla gardening, a practice that sees a diverse range of people plant flowers and greenery in peculiar places not designated for green space, such as sidewalks, potholes, and even dumpsters. This movement was born as an act of resistance against the proliferation of concrete jungles that we call our cities.
In terms of sustainability, graffiti with moss is the more eco-friendly way to go. Compare it to traditional advertising methods where, every two weeks, over six million square meters of poster paper are thrown out – and that’s in Europe alone. Producing paper takes twice the energy used to produce a plastic bag which leads to large-scale deforestation, leaving a disastrous impact on the environment. In addition to the immense paper waste, billboard and giant poster advertising usually uses a combination of toxic glue and non eco-friendly ink that’s hard to separate. This destructive union is polluting our land and atmosphere.

Transparency and research are key

Brands advocating for sustainability and that are thinking of running eco-friendly marketing campaigns with moss graffiti need to be aware of a number of things prior to employing this art medium. The benefits of graffiti with moss advertising shouldn’t cause companies to overlook the fact that, depending on several factors, this way of advertising could be just as detrimental to the environment as traditional marketing. The last thing a brand wants is to be accused of greenwashing, so it’s best to do plenty of research.

Moss sheets are frequently used as the foundation of the graffiti in order to provide a smooth base and increase longevity. A moss sheet is essentially dead moss that has been treated and glued onto a plastic mesh or burlap. The glue and plastic used here are far from environmentally friendly, as they aren’t biodegradable.
Other forms of moss include Spanish moss, which is not an actual moss but a bromeliad, and reindeer moss; these two preserved and dead flora will not work with live plants. The artificial moss suffocates and kills the soil, greatly reducing the life expectancy of the installation along with exhausting the living moss’s valuable ecological role as a bioindicator. What’s more, there’s a growing concern about the effect on human health and the environment of the synthetic chemicals in artificial moss, as well as microplastics – another source of pollution present in artificial greenery.

A further factor to consider when planning a sustainable graffiti with moss campaign is checking where the moss was sourced from. Pillaging moss on a mass scale from the wild for a graffiti installation is not eco-friendly, and can potentially disrupt moss growth of over 10-50 years. Brands wanting to advertise with moss should be aware of this and source their moss from a sustainable producer who is licenced to distribute, like Freund GmbH, a family company based in Berlin that takes pride in providing natural and sustainable products. It is also important to be aware of the many different species of moss that are often very specific about where they grow and how much moisture they depend on.
Reverse graffiti is an alternative way to sustainably use moss as graffiti. Find a wall that is already covered with moss, and remove the moss to create a design, just like a sculptor would carve a figure from a block of marble. This way, the moss is not completely detached from its environment and will eventually grow back. An example of reverse graffiti can be seen along the roadside in Japan. Created by an unknown artist, it depicts characters from the renowned animation studio Studio Ghibli.

Benefits of graffiti with moss advertising

Despite these considerations, graffiti with moss is undeniably a greener - literally and metaphorically - alternative to spray paint graffiti. Creating “mossaging” ad campaigns will provide urban surroundings with a green space, which is shown to promote positive mental health for city-dwellers. As this form of advertising is not as common as traditional graffiti, it will no doubt capture people’s attention and create a buzz online, just as Hornbach did with their guerrilla gardening marketing store front campaign.
The store was transformed with thousands of early bloomers, bushes, and ivy tendrils that converted an otherwise bland intersection into a hanging botanical garden. Following the nine-day campaign, Hornbach donated the 1250 square meters’ worth of plants to charitable organisations, simultaneously eliminating waste and continuing to insert a bit of colour into the city.
By bringing graffiti with moss indoors and creating “moss walls”, you get a low maintenance green work of art that, unlike living plants, has its moisture replaced with natural preservatives and does not require watering. These plant paintings provide improved air quality and contribute towards lower energy costs by acting as an extra layer of insulation to indoor areas. Adding a moss wall inside an office space transforms the usually bland interior into a thriving piece of art which is known to also reduce noise and create a more peaceful working environment - benefits that any employee will undoubtedly appreciate. Again, it’s worth stressing the importance of carefully choosing the right kind of moss when designing moss walls, and avoiding preserved and synthetic materials.


Examples of graffiti with moss advertising

Graffiti with moss advertising does not always have to be as bold and grand as Hornbach’s store front. Adidas recently implemented their own take on the green graffiti alternative in a more subtle manner. The brand ingeniously transformed two tram stop shelters into an urban jungle resembling a scene from Jumanji. Using natural materials such as reeds and moss, Adidas promoted their iconic green Stan Smiths in a way that would certainly stand out against their competitors. Google, which frequently advocates for sustainability, has also been seen utilising the green art moss medium with a typographic installation spelling out a hashtag handle. This form of advertising creates a fun and memorable experience, helps build a brand’s image, and most importantly utilizes natural resources without causing the ramifications that traditional advertising does.

The US-based graffiti with moss implementer Paloma Teppa describes how she found daily interaction with plants helped her heal, and realized she needed to pass on this healing onto others. Her work consists of bringing people back to nature through her beautiful biophilic designs that intertwine with architecture, creating a peaceful and comfortable space. One of her famous designs can be seen on the shopfront of the botanic art gallery Plant the Future in Miami, Florida.

An unforgettable way to advertise

Graffiti with moss is undoubtedly a unique and eye-catching way to advertise. It’s an excellent choice for brands wanting to liven up a city area - while keeping it feeling green and liveable - and appeal to a wide demographic. This form of advertising can make your brand go viral and create a buzz online for all the right reasons. Both sustainable and environmentally friendly, graffiti with moss dissolves traditional boundaries between art and ecology, generating a new creative approach to advertising. 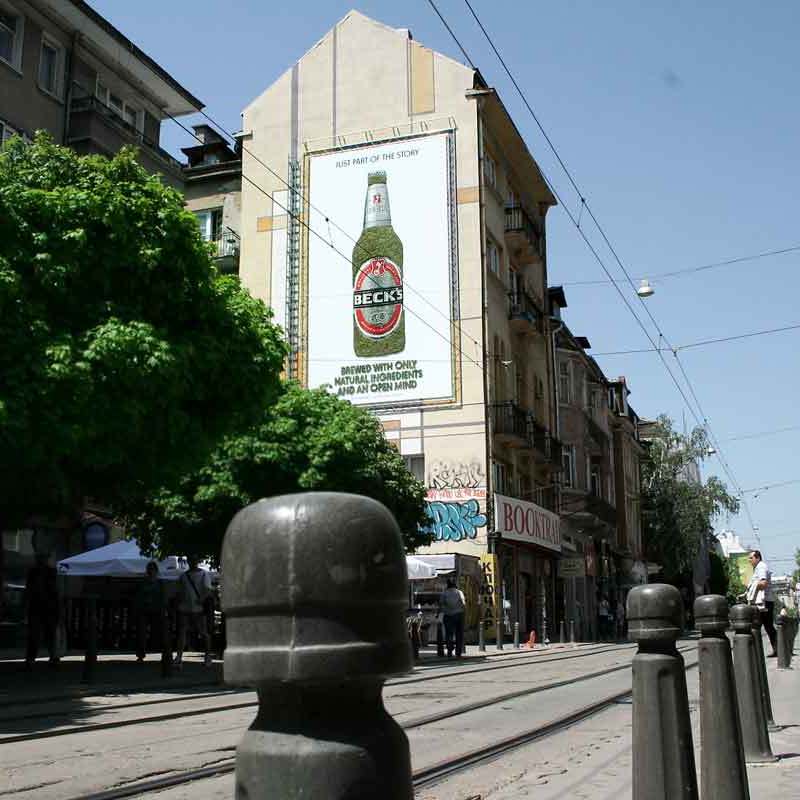