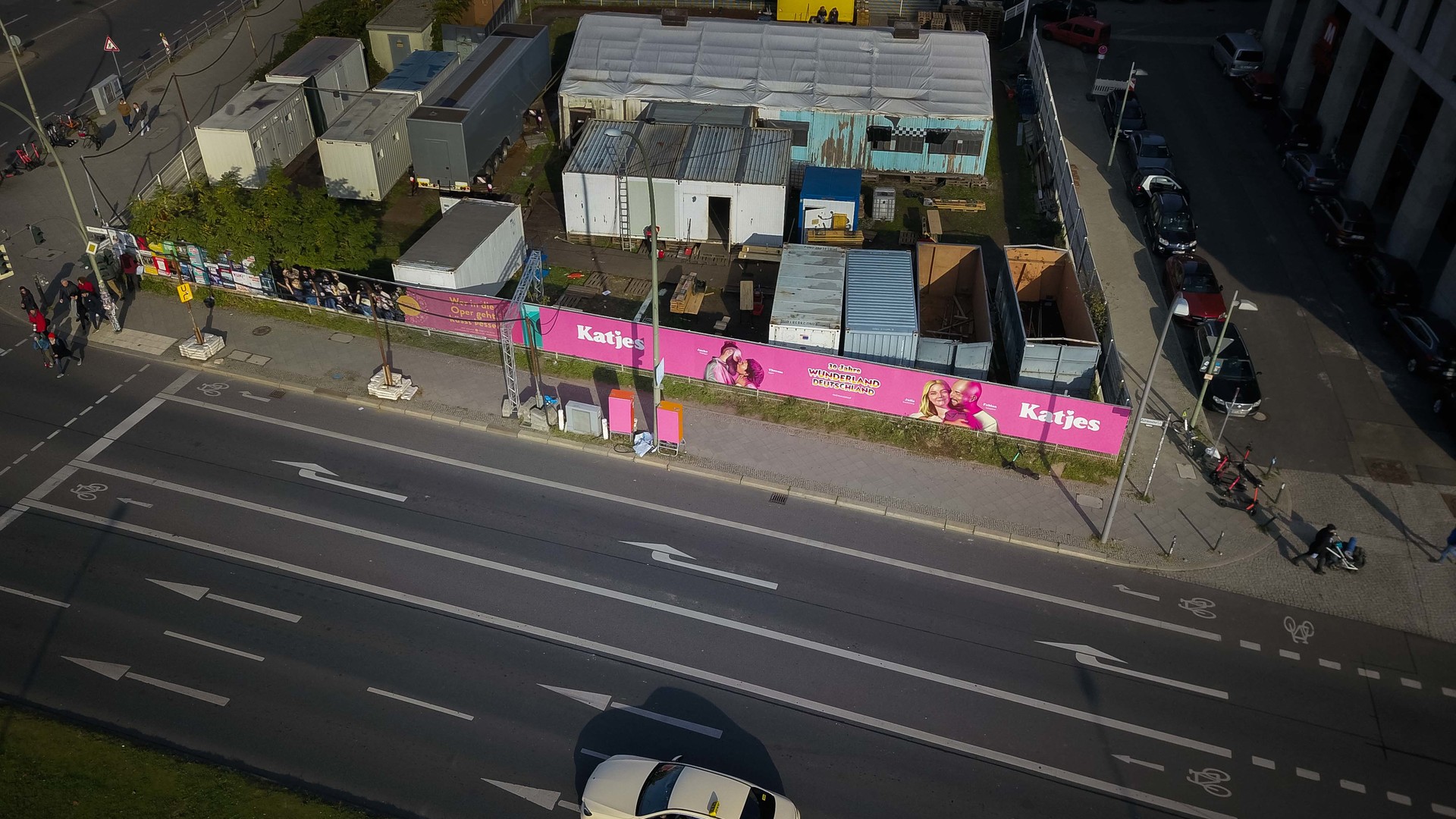 Confectionary brand Katjes has been into sweet treats since its cat-shaped licorice recipe turned out to be a sugary hit over a century ago.
As an open-minded company that embraces veganism and sustainability, the brand decided to mark the 30-year celebration of the Berlin Wall’s downfall through street art with a graffiti advertising campaign. We connected them with Nasca Uno, a Berlin-based painter with a background in street art, who took on the task of transferring the visual onto a line of plastic boards displayed to billboard the campaign.

Situated right opposite the landmark East Side Gallery, the shocking pink piece looks out at iconic commissions, which have come to immortalise the energy that ensued from the collapse of the oppressive line once dividing an entire city. Katjes’ and Nasca’s graffiti advert is a bright band of nostalgia, romance, hope, and celebration that introduces one theme of the anniversary: the real stories of East-West love that came to be once the barrier between couples was torn down. It’s an outcome we don’t often think about, but this artwork reminds us of some of the joy that resumed following the tear-down.
As a graffiti advert, this work doesn’t just focus on marking the famously destructive date in the wall’s calendar; it celebrates a new product that came from this commemoration. “Wunderland Deutschland” has been launched by Katjes as a goodie bag that celebrates the love, friendship and peace binding the people of Germany.

See how 4 female street artists transformed the east side gallery with graffiti and tape art for Maybelline.

New flavor of sweet, new art on the street

Nasca’s usual style is one that sees surreal influences meet figurative art. Wide-ranging and extremely recognizable, the artist is known for using dark wrinkles to bulge webs of depth over the surface of his paintings, accenting this surreal touch with a tight use of color that sets the underlying mood of each piece. He aims to create artworks that give viewers a sense of escapism, intriguing their minds beyond the real world, staying clear of defined concepts.


Celebrating the fall of the wall by representing real couples

Katjes knew exactly what picture they wanted painted. As they were in search of a Berlin-based artist with outstanding technical skill, we helped them identify Nasca Uno as a great fit for their project. From there, the artist was handed a ready-drawn graphic awaiting street-view enlargement. Rather than leading the creative flow as in his personal artworks, here Nasca explains that he saw his role as more of a technical executor.


This is an example of the result of client direction in a project, but Nasca mentions he was pleased the commission allowed him to demonstrate his technical painting abilities and to execute his skill in realism. His work on this graffiti advert also led to a second booking with the confectioners!

A new number on a street of art

Once the piece took shape, the responses started to generate. Situated on a street already known for its murals, the nearby public are a diverse demographic receptive to Katjes’ fresh graffiti advert. Nasca saw people drawn towards the mural positively take in the glowing sign of companionship. That the mural could please such a wide range of observers attests to the universality of its premise of celebration and love.
As for Katjes themselves, they were new to the mode of street art and had their expectations surpassed, enjoying the outcome of this method of getting their name out there – because collaborating with a talented artist is a sure and original way to make a striking point with promotion.

Making a mark with graffiti adverts

Contemporary advertising has seen a lot of companies employ street art as part of their public campaigns, because as an avenue of branding, hand-painted murals gather attention as artworks – each piece appeals through the artistic talent behind it and the pull of the brand itself. By including an artist in an advertising strategy or trying a graffiti advert, companies can open up a whole new field of creativity with which to reach people. See how Rita Ora and a Street Artist helped Thomas Sabo stand out in Fashion Week Berlin.