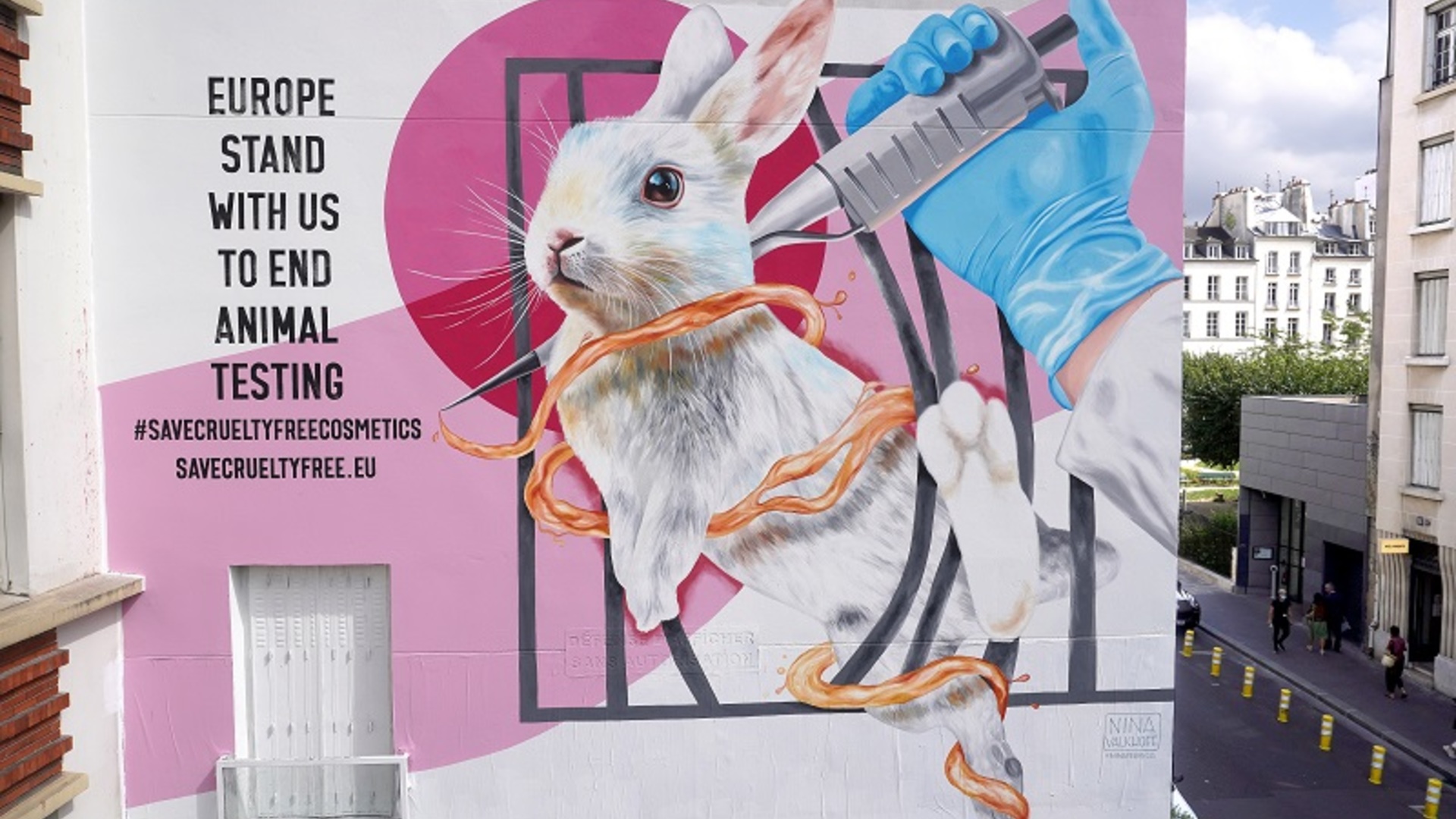 Home  ›  Stories  ›
Advertising murals: How to find the right collaborations?

Nina Valkhoff and her way into painting advertising murals

Her living room looks as colorful and green as one might have expected before starting the Zoom call. Rotterdam-based street artist Nina Valkhoff usually paints murals of endangered species, so it’s no wonder her own space is filled with greenery as well.

“The way I got into street art was really more of a coincidence”,

She begins sharing her story.

“I was taking dance classes during my art studies and the owner of the studio asked me one day, ‘Hey, you’re good at painting, would you paint a wall for me?’ So this is how I started!”

“When I started doing graffiti, there was no street art scene as there is today. It wasn’t that big a thing. So it took a few years until I met artists who openly claimed to be street artists.”


Nina realized that that’s what she wanted for herself too. She continued developing her very personal style, and for several years now she’s been getting requested for exactly that: her own style. Which is a dream come true when it comes to advertising murals. A style which puts endangered species, animals, and plants into focus in a joyful, realistic and colorful way.


“It’s super hard to say no to a cool request”,

Nina giggles. But it’s just as hard to say no to a cool street art festival.

“Most festivals are limited to one week during which spectators are allowed – usually towards the end.”


Street art festivals allow the artists to freely express themselves, to connect with each other while showing their work to fans and potential clients. It’s the only time artists such as Nina can create their murals 100% freely, detached from advertising.

Staying true to oneself while painting murals for advertising

In a collaboration, the most important thing in Nina's experience is to stay true to oneself. The artist often knows more about a mural’s practicalities than the client, so standing one's ground is important and can be beneficial for everybody. With years of experience, a street artist knows instinctively what and how to transfer a client's wish to the wall – a marketing team might have great ideas for advertising murals but simply lack the actual know-how.
Charlotte Specht, an entrepreneur with over 10 years of experience working with artists, goes into detail over the phone a few days later.

“There are many different forms of collaborations. Our job at Basa Studio is to find the right street artist for an assignment and to make sure everybody is on the same page.”


Some jobs simply require a technical execution, she explains, which is usually when the client has a very specific request beforehand and there are many feedback rounds.

“These are things we communicate right away so that nobody gets misunderstood.”


In Charlotte's experience, many artists build up a second identity for their commercial works and advertising murals so that they don’t get associated with this work during street art festivals, for example.

“It’s a very personal choice. But of course if you don’t want to compromise on your creative freedom as a street artist, you should simply say no to collaborations, it's as simple as that.”

One of the biggest mural advertising partners for street artists is – surprisingly – Netflix. We all know it, we all trash it and we all couldn’t live without it. Just as Netflix is omnipresent in our living rooms, it is present in our streets, with a rather impressive (and aggressive) guerrilla marketing strategy. The diversity of murals and the examples from which to draw on here are numerous. Let’s stay in the Netherlands to begin with. Back in 2019, there was a huge mural advertising campaign all across the country, promoting the Umbrella Academy, a famous Netflix series.

In Eindhoven, The Hague and Maastricht, different street artists showed their interpretation of the Umbrella Academy’s main characters: six personalities realized by various experienced street artists. Each advertising mural is unique in its execution and stays close to each creative’s usual style. The black umbrella connects the narrative across cities, styles, and personalities. A captivating example of what a good collaboration can look like.
Read more about the benefits of mural advertising.


Another Netflix example that showed how far graffiti advertising can go was the campaign they ran in Berlin for the series “How to sell drugs online fast”.
Designed by artist Chemical X, and produced by Basa Studio and Old Yellow, the installation mural had over 120k fake ecstasy pills of different colors, which created a sort of mosaic-look for the artwork. The piece was so impressive and bold that the Netflix team had to hire a private security company to watch the artwork at night in order to avoid anyone breaking the glass layer protecting it.
You may also be interested in: 4 of the best street art advertising campaigns.

The big question is, of course, how to get an assignment with a giant brand such as Netflix?
The answer is probably as simply as it is annoying: patience. Patience and a good network, according to Charlotte. Being constantly in touch and reaching out to other street artists and/or agencies, discussing assignments and, most importantly, fees. In graffiti there is no standardized fee for an artist’s accomplished work, so comparison – or finding an agency partner such as Basa Studio – is key to securing the right advertising mural collaborations.
Examples on how some brands like Ikea and the UN painted graffiti advertising murals with artists who were aligned to their company's values.

To sum up, advertising murals and street art are more present on the market than ever before. This comes with more requests and more attention, but also more need to set clear boundaries as an artist – just as much as a client. Advertising murals enable the promotion of a product in a unique and very individual way, but this always comes with a need for communication: between artists and clients, or, even better, with an intermediate agency.